“The NEC 8401 A is the second generation NEC notebook portable computer. It is significantly different from the 8201, and we expect it will appeal to a different type of customer. Briefly, the 8401 has a 16-line by 80-column fold-up LCD screen, 64K of RAM, and a built-in 300 baud modem, and can be operated using batteries or an AC adapter. It uses the CP/M operating system and has four built-in software packages including Wordstar-To-Go, Calc-To-Go, Telcom (telecommunications utility), and Filer (personal card filing program).” 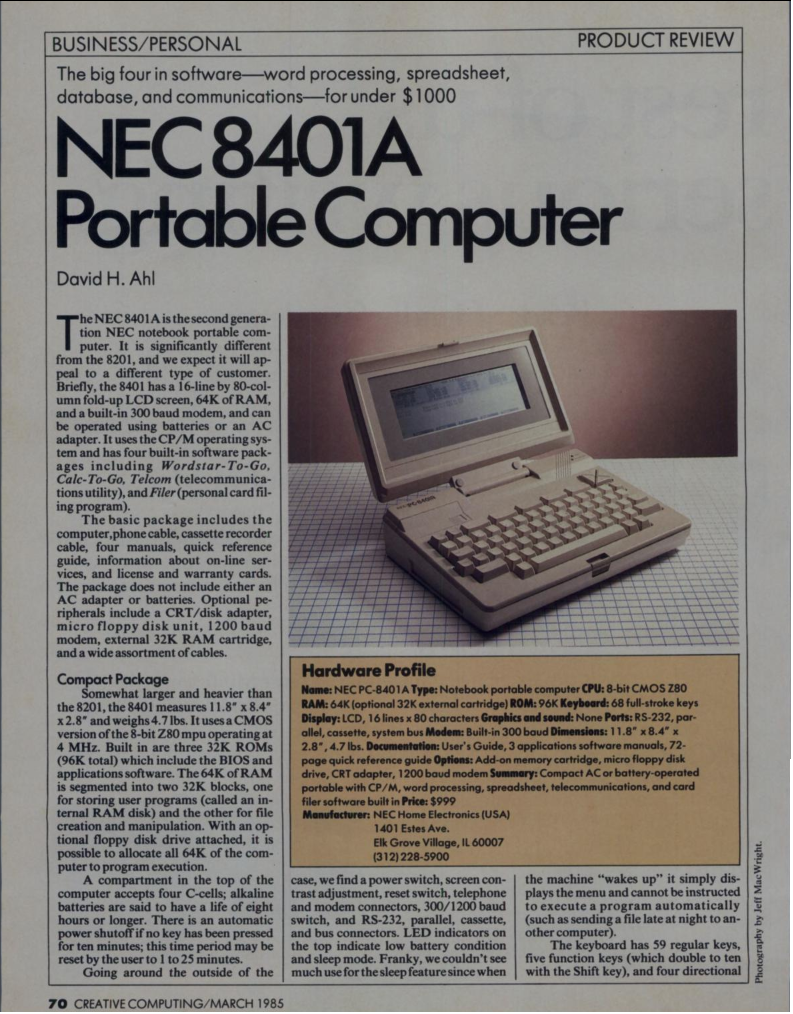 A compartment in the top of the computer accepts four C-cells; alkaline batteries are said to have a life of eight hours or longer. There is an automatic power shutoff if no key has been pressed for ten minutes; this time period may be reset by the user to 1 to 25 minutes.

Going around the outside of the case, we find a power switch, screen contrast adjustment, reset switch, telephone and modem connectors, 300/1200 baud switch, and RS-232, parallel, cassette, and bus connectors. LED indicators on the top indicate low battery condition and sleep mode. Frankly, we couldn’t see much use for the sleep feature since when the machine “wakes up” it simply displays the menu and cannot be instructed to execute a program automatically (such as sending a file late at night to another computer).

The keyboard has 59 regular keys, five function keys (which double to ten with the Shift key), and four directional cursor keys (arranged in a convenient diamond pattern). A numeric keypad can be toggled on and off with the NUM key, while the ALT key toggles on an alternative keyboard which includes 28 Greek letters, 17 math symbols, and 38 graphics symbols. While it’s nice to know that they’re there, it is not at all clear how these symbols can be used. Although a bit noisy, the keyboard has an excellent feel and a sensible layout.

The display measures 7.5″ x 2.4″, the same width and only 0.4″ higher than the one on the 8201 (and Tandy Model 100). This means that nearly four times as many letters are packed into the same screen size as the previous machine. Characters are formed in a 6 x 8 dot matrix; to enhance legibility, vertical strokes are wider than horizontal ones. Nevertheless, one pixel vertical and horizontal spacing coupled with one pixel descender occasionally makes for difficult reading. 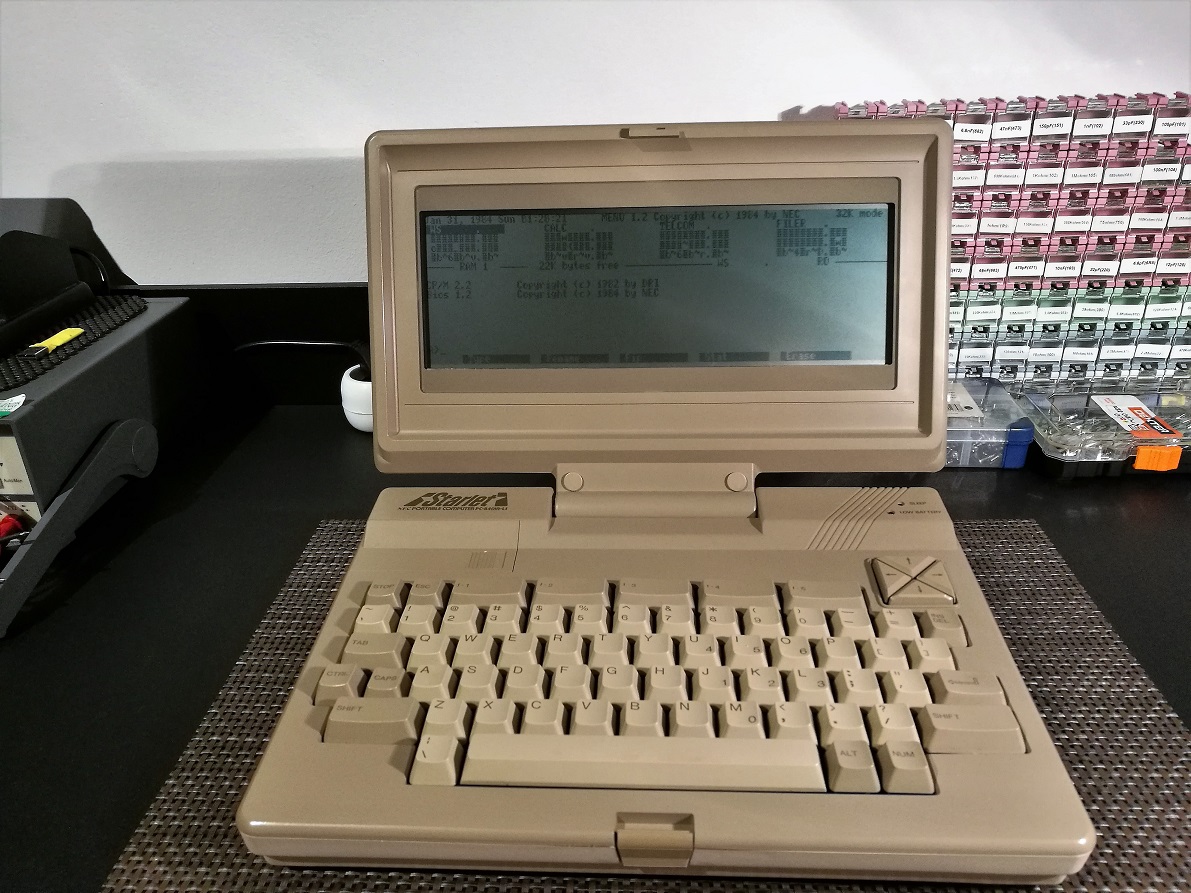 The  Starlet  comes with a number of programs that run from  ROM.  MicrPro’s Wordstar and CalcStar are included in their mobile, “To  Go”  forms.  WordStar was the default word processor back in  the  day and so it’s inclusion here is logical.  In addition, there is a terminal emulator and personal filer.

I got mine from eBay and its not powering up. After opening the machine and spending some hours on the web I was able to find why this machine does not start. It seems the 4.8V battery (NI-CD 4.8 YUASA Japan) is drained, not that I blame it as its marked December 1984. Good news is that it did not leak, not a bit.

I had replaced that with 4XAAA 1.2 NI-MH rechargeable batteries and the next step is to follow below instructions to power it up. 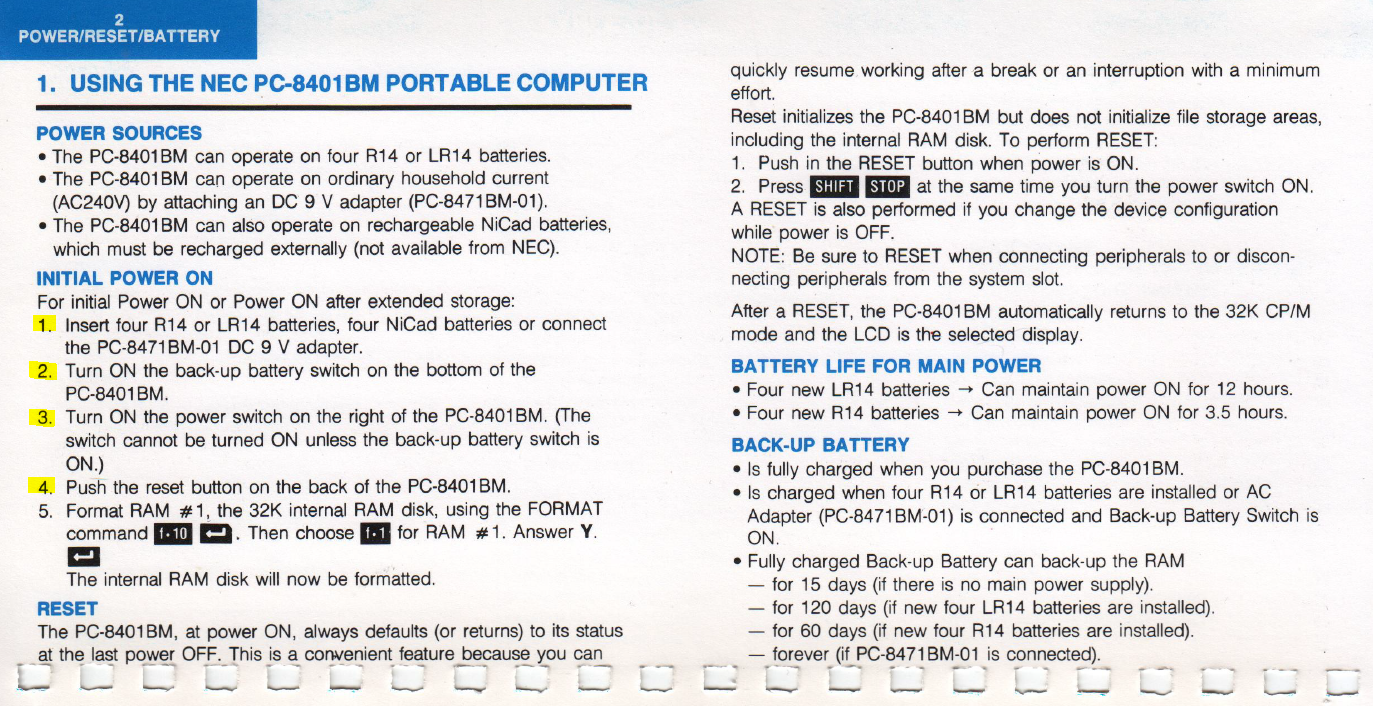 I was able to start the machine and here are the pics. Picture or it didn’t happen!